Chef of the Year 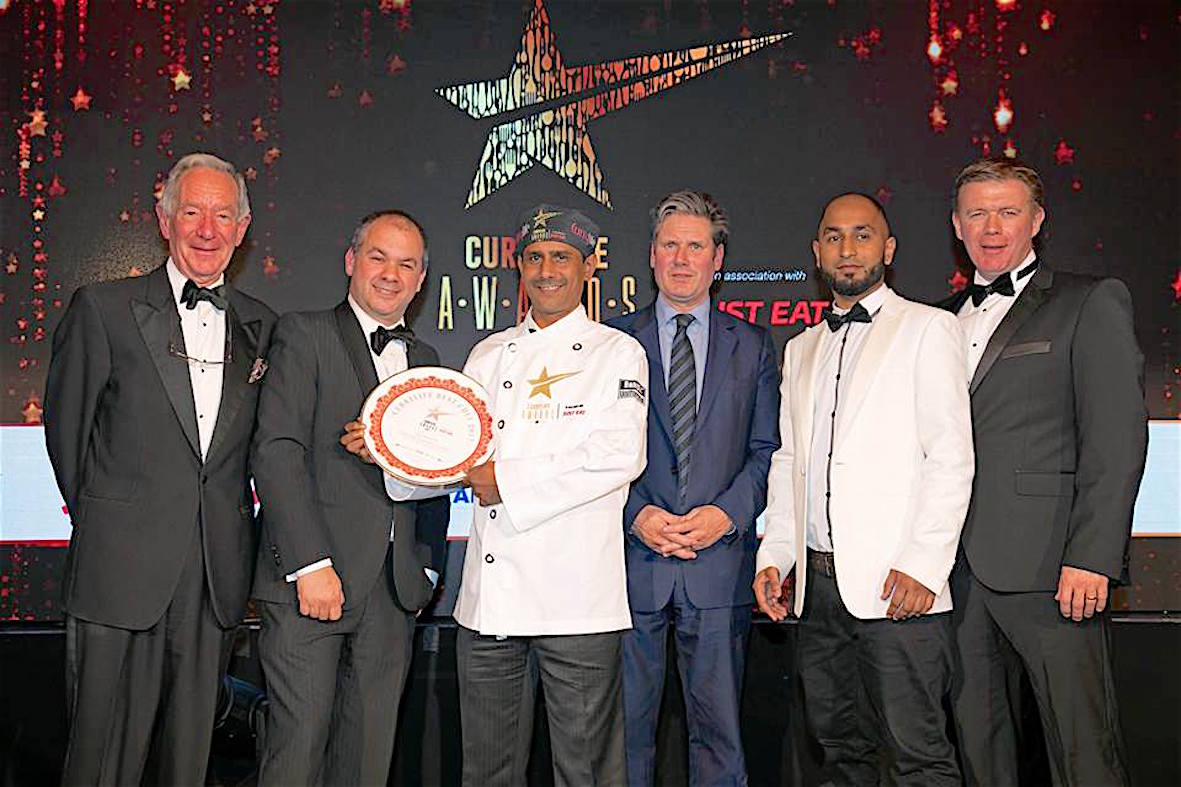 n(L - R) Michael Buerk, Broadcast Journalist, Mr Paul Scully MP, winning chef Mr Mukter Ali from the Vine Indian Cuisine,
Sir Keir Starmer MP, Shadow Secretary State for BREXIT, Mr Iqbal Hussain Shoeb manager of the Vine Indian Cuisine,
Mr Graham Corfield, UK Managing Director of Just Eat.
Iqbal added: "Customers often come in and ask him to rustle up something special that isn't on the menu and he is comfortable doing that at the drop of a hat because he loves experimentation."

Chief Guest at the ceremony Sir Keir Starmer MP, Shadow BREXIT Secretary, said: "The curry industry makes a huge contribution to the economy and is an integral part of the UK dining experience. It's been through some tough times but has continued to grow and develop to meet the growing appetite for this cuisine."

He went on to say, "Its employees epitomise the ethos that hard work brings success and I'm
delighted they are in the spotlight tonight and able to sit back and enjoy an evening off."

Lord Karan Bilimoria, Founder and Chairman of Cobra Beer, said: "It's wonderful to see the talent on show tonight. You have to be passionate to achieve anything in life and speaking to some of the winners tonight it's clear this is a vocation, not a job. I've worked alongside
restauranteurs for many years and their dedication is something we could all learn from."

Mr Graham Corfield, Managing Director of the Just Eat, said: "There is no doubt that curry is one of the nation's favourite food and behind the great tastes of curry, are great craftsmen. We are all in an awe of what the chefs do and I applaud them for producing some of the most exotic food in the world at the cheapest prices.

"Those chefs and restaurants have been awarded by Curry Life, deserves to be congratulated for their hard work and achievements," he added.

The Curry Life Awards celebrate the unique fusion cuisine of Indian food in the UK and is part of a wider organisation that organises the British Curry Festival around the world.

Syed Belal Ahmed, Editor of Curry Life Magazine and founder of Curry Life Awards, said: "It's a great accolade because the level of Indian cuisine in the UK has reached unprecedented heights, which includes several Michelin star restaurants.

"The British love their curry and that is inspiring chefs to be more creative pushing the boundaries of flavours and presentation. It's not been an easy time for the industry in recent years with the recession and restriction of working visas but it has still managed to up its game in response to the public's appetite."

Over £3,000 was raised on the evening for the Disaster Emergency Committee (DEC) Myanmar Appeal. The DEC, which represents 13 of the UK's leading charities, has been raising funds to support thousands of refugees fleeing torture and abuse and taking shelter in neighbouring
Bangladesh.